South Africa like every other African country is made up of a diverse mix of ethnic groups, culture and religion. This has given rise to various kinds of traditional dresses worn across the country. 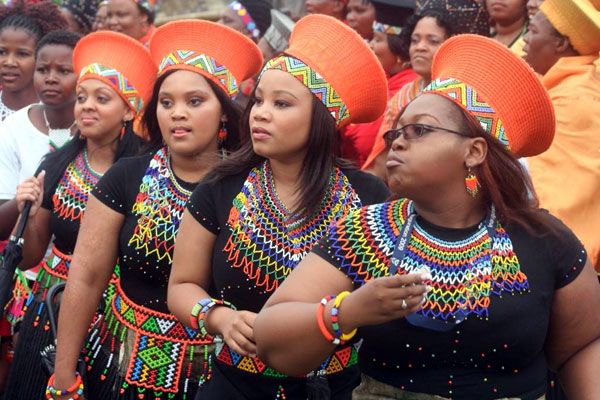 The Zulu tribe is the largest ethnic group in South Africa. Their traditional attire is created for utilitarian, celebratory and symbolic purposes which are very diverse for both men and women. This is usually influenced by factors like age, region, religion, and the occasion the person is wearing the clothes for. Their dress is usually bright and colorful especially for women and girls.

A single woman wears her hair short with only a short grass-reed skirt which is embellished with beads. Those who are available proudly display their figure and do not wear anything on the upper part of her body. They also wear a lot of creative beads around their waists, necks, ankles and elbows.

An engaged woman lets her hair grow. She covers her breast with a decorative cloth as a sign of respect to her future family. This also informs the people of the community that she is spoken for.

A married woman must cover her body completely. This is a signal to other men that she is off limits. She wears a thick skirt made from cow hide that has been softened with animal fat and charcoal. They also have to have a hat or shawl on their head to symbolize her status. These hats are usually circular-shaped and are called Izicolo. They are traditionally made of grass and cotton and usuallymeasured as much as a metre across to protect the wearer from the sun.

Zulu men on the other hand wear animal-hide coverings and feathers. They see the leopard as King of all predators; hence, only royalty is allowed to wear leopard skin. The genitals and buttocks are covered by a front apron (isinene) and a rear apron (ibheshu). Amashoba, which is the tuft of a cow’s tail, is worn on the upper arms and below the knees to give them the appearance of a greater bulk. A headband is used only by married men. 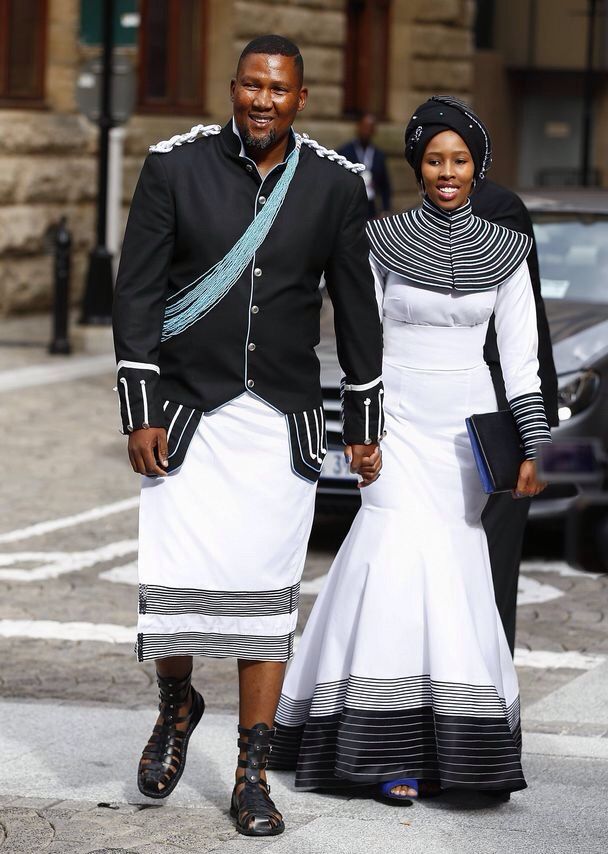 The Xhosa attires are designed for men and women and are usually decorated with beads. Like the Zulu women, single young women go shirtless. Bead work is also heavily used in their clothing. Bracelets made with bead are also worn on their feet and waist. On the head, they wear the Iqhiya which is also adorned with beautiful beads.

Men wear brightly colored blankets or cloaks that have been dyed with natural dyes. They also wear beads around their head, neck, wrists and foot. They are known to smoke pipes that have been decorated with ukurhaswa.

Traditionally, married women wear a goat skin apron which covers the back and front. On ceremonial occasions, they wear aprons made from sheepskin. In modern times, a similar garment is made from “wenda clothe. These are narrow strips of cloth hanging between the legs over a girdle in the front and back and are worn by the young females. Decorations are made from twisted grasses which are used as bracelets and necklaces or pieces of copper twisted round a string of cotton and which are worn around the ankles and wrists.

Traditionally, a Venda male wears a triangular piece of soft skin which covers the front and is passed between the legs to be tied at the back. They are usually made from goat skin, klipspringer or duiker. A rope is then worn around the waist. The chief wore an animal skin headband and a sila over his shoulders.

Vendas are known for their unique ceremonies such as the rain dance. For this dance, a male rain dancer wears a skirt made out of grass along with feathered headdress and armbands. Females on the other hand wear traditional loincloths with animal skin and leather in their hair.

This tribe consists of Dutch-speaking farmers who descended from the Dutch East India. They wore simple everyday clothe but nicer outfits when they had celebrations. Their major signature piece is the Voortrekker bonnet. Their modernized style has been characterized by aprons and neckerchiefs.