President of France, Mr. Emmanuel Macron on Tuesday night made a historic visit to the Afrika Shrine, home of the late Afrobeat legend, Fela Anikulapo Kuti, describing it as an iconic centre for the propagation of African culture, strength and music.

Macron, who spoke at the New Afrika Shrine in Agidingbi, Ikeja, Lagos, at an event tagged ‘Celebration of African Culture’ to inaugurate the African Cultural Season 2020, said he was glad to be back to the Afrika Shrine, adding that he still holds fond memories of the place since his first visit back in 2002.

He also disclosed plans to host the African Cultural Season 2020 in France, which he said, would be about promoting African culture in Europe, adding that the event was going to be for Africa and by African artistes. 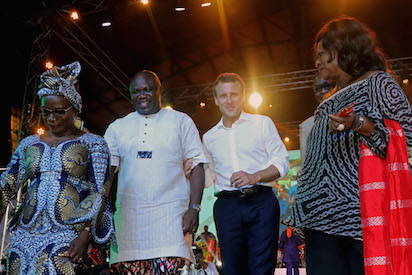 “It will include people with fashion, African movies, new generation of artistes will be coming from Africa and it will be organized by them to show Europe and France” the real culture of Africa.

“The event will be financed by African leaders. It will not be sponsored by France or European businesses, but by African businesses, it is brand new. This season is a unique one and it will be the new face of Africa in Europe organize by Africans, providing what you like and what you have here,” he said.

At the official unveiling of Alliance Francaise, a French Cultural Centre in Lagos on Wednesday, Macron said the development was part of the measures to scale up the relationship between France and Nigeria, while also specifically offering the commitment of the government and people of France to development of infrastructural projects in Lagos.

“Thanks very much for being here; thanks very much for making this possible and to Mr Governor, we spoke yesterday and this morning together in the car. Going to shrine together yesterday and going to French Alliance now. It’s much more quite, much more calm and reasonable but at the end of the day, I think both of us (Governor Ambode and I) did share the same views that we can do tremendous things together. 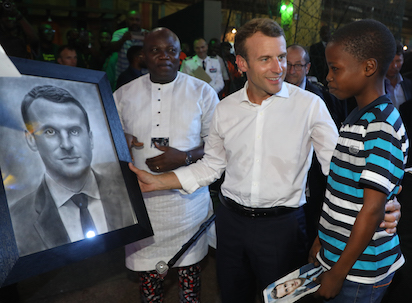 French President Emmanuel Macron (L) meets with a young boy who drew a portrait of him during a visit to the Afrika Shrine in Lagos on July 3, 2018. / AFP PHOTO /

“Your State – Lagos, is one of the main challenges of not just Nigeria but the whole of Africa. I mean this huge city, there is tremendous challenge about how to make people living together in peace, in a better place and I want France to be part of this story and I do want my country and my people being part of this experience. It means belonging same values, sharing cultures, languages, literatures, music, movies, building together projects, having common economic projects and so on, and this eco system will be not just possible but stronger staying in this place,” Macron said.

Earlier, Lagos State Governor, Mr. Akinwunmi Ambode while welcoming President Macron to the State, expressed optimism that the historic visit will go a long way to break any barriers between Nigeria and France as well as foster greater collaboration for economic, social and cultural growth.

The Governor said the State Government was delighted to host Macron, a well-respected global leader, adding that it would also signal a new era between both countries, especially for Lagos where talents in the arts and creative industry abound.

“On behalf of the government and good people of Lagos State, I welcome His Excellency, President Emmanuel Macron, President of France, to the commercial and cultural capital of Nigeria and indeed West Africa.

“We are delighted and honoured to be hosting a President of one of the world’s Super Powers; a permanent member of the United Nation’s Security Council with veto rights, a prominent member of the G8 and the World Trade Organisation and a champion of Global Climate Change. 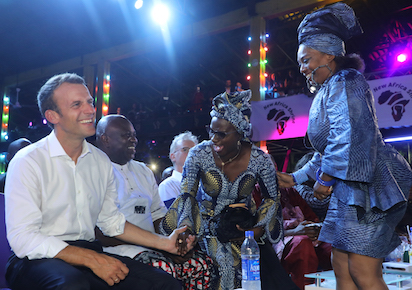 The Governor said he was particularly delighted that Macron’s visit to Lagos began on a cultural and entertainment note, adding that the French Cultural Centre and Alliance Française based in the State had always been an asset to its cultural landscape in the same way that Trace Television had also become an invaluable addition to its music and entertainment sphere.

Governor Ambode said he was very optimistic Macron’s visit and activities would boost the State’s quest to become the culture and entertainment capital of Africa, just as he said that the State Government would seek to establish collaborations with France and play an integral part of the Year 2020 African Cultural Season in Paris as envisioned by President Macron.

“With the exceptional characteristics of our State as the most populous, vibrant and indeed the fifth richest economy on the African continent, Lagos is the undeniable destination for business and pleasure in Africa. The new Lagos experience is being enhanced daily as we continue to create an enduring infrastructural and security architecture for the business of tourism and cultural arts to thrive. This also creates a platform for our local talents to feel a sense of belonging and encouragement.

“Mr. President, this momentous State Visit shall signal the dawn of a new era between France and Nigeria especially for the myriad of talents that have made Lagos their home,” the Governor said.

He said Macron’s emergence as the President of France has inspired many youths in Nigeria, who constitute 60 percent of the country’s population, adding that Lagos was providing avenues for youths to explore their creativity and talents.

There were also Art Exhibition, Fashion Show, display of Nollywood scenes, presentation of a painting of Fela to Macron by Governor Ambode as well as pencil frame artwork of Macron done by 11-old old Kareem Olamilekan drawn within two hours. 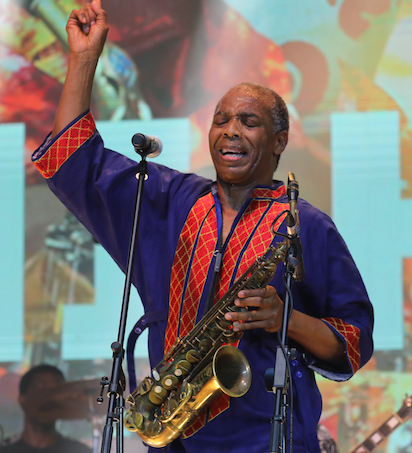 Femi Kkuti performs at the event.

Highpoints of the night include sterling performances by dance group, Footprints of David, music artistes, Yemi Alade, Charlotte Dipanda from Kenya and a scintillating performance by Femi Kuti to bring the event to a close.