The Olojo Festival is a culture festival in the calendar of the Ile-Ife, Osun State which is located in the Southwestern part of Nigeria. It is the celebration of the remembrance of “Ogun”, god of Iron, who is believed to be the first son of Oduduwa, progenitor of the Yoruba people. The festival is held annually in October.

Ooni of Ife, Oba Enitan Ogunwusi, has called on the people of the Yoruba nation within the country and in the diaspora to harmonise efforts towards promoting all cultural festivals and traditions of the race. 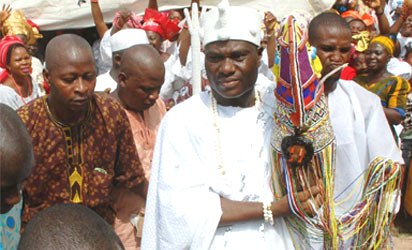 Ooni of Ife with the Royal Crown

The monarch spoke in his palace in Ile Ife, during a press briefing ahead of this year’s Olojo Festival.

Oba Ogunwusi, who was flanked by palace chiefs, priests and sponsors of the celebrations that include Bet9ja, MTN, Goldberg and Seamans Aromatic Schnapps, decried the continuous description of adherents of traditional religion as idol worshippers.

He urged the people of the race to rise to the challenge and protect their cultural beliefs.

Oba Ogunwusi said the entire Yoruba race should jointly embrace the tradition of their forefathers, repackage and export it.

According to him, “failure to admire it would surely destroy the labour of our past heroes. We are not idol worshippers, but we are using the celebration of the festivals to acknowledge and give due honour to all our deities that have contributed immensely to human existence.

“Olojo festival symbolises celebrating the first day of creation and the beginning of existence in Ile-Ife, being the cradle of human race.

The word “Olojo” implies reference to Olodumare, the creator and the owner of the day and that is why Olojo festival is being celebrated in Ife kingdom, the cradle of Yorubas.

“Christian and Muslims do celebrate and remembrance Jesus Christ and Prophet Mohammed in due times same thing should be applicable to the traditional religion adherents,” he explained.