The Ankle Beads: History, Symbolism of a Cultural Trend

As Nigerians are still very conservative towards the use of ankle chains, a more traditional alternative seems to be making a come back. The Ankle Beads. They have begun to make their marks among girls and women. YEMI TAIWO brings more light to this story.

An anklet, popularly called Ankle chain in Nigeria is a piece of jewelry either made of chain, beads or both and is worn around the ankles as a fashion statement. This fashion piece has been demonized largely because a one sided story was given about its origin. We accepted it as truth without bothering to do a little research of our own.  So, what exactly is the origin of this highly abhorred ankle chain?

It is believed that Egypt was the first ground of usage but India seems to be the first major ground where it was widely accepted. Traditionally, only Indian warriors and brides wore them. It was also used to distinguish their married women from others. In Egypt however, it was more of a fashion statement with the rich wearing anklets made from gold and the poor wearing anklets made from silver or leather.

In the 70’s, anklets became a mainstream pop culture accessory as part of the “Slut revolution”. This was the era where modern women began to live a life of sexual liberation. It was by this a warped perception of associating anklets to promiscuity was born. It’s the 21st century and some still stick to the idea that it’s a sign of availability. 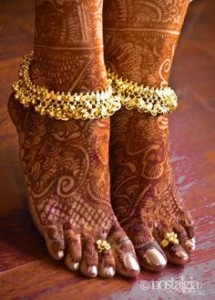 Bringing it back home, Nigerian women have been harshly judged for wearing this. It is believed that they are no longer conservative by African standards and are picking up negative fashion trends from the western world. With the look of things, this alternative would perhaps tie us to our own culture and roots. But should more meaning be read to this new trend?

By history, everything we do symbolizes our culture in every way. Beads were worn as sign of royalty, as adornments, as talisman and even as a way to identify with a deity being worshiped. Ifa devotees are known to wear green beads and brown beads while Osun and Oya devotees are known to wear white beads. While the ankle beads come in different colors, they should not be mistaken for the ones associated with modern deity worshipers. Instead, it should be seen as an attempt to preserve our dying culture.

With all said and done, I believe anklets should be left as what they simply are – fashion accessories.