Dambe is a centuries-old West African form of kick boxing originating from the butcher caste of the Hausa people. A fight lasts three rounds, ending in the knocking out of one of the opponents. Dambe fighters do not use boxing gloves but instead wrap their hitting arm in rope.

Historically, Dambe derived from the Hausa word for “boxe” and included a wrestling component, but now it is essentially a striking art. Traditionally it was practiced as a way to ready men for war and its techniques and terminology allude to warfare.

Although there are no formal weight classes, competitors are fairly matched. These competitors aim to knock down their opponent using kicks and punches in the three-round fight. Like the weight classes, the rounds are also open ended – there is no time limit. Instead a fight ends when there is no activity, one participant or an official calls for a halt, or a participant’s hand, knee or body touches the ground.

The main weapon is the participant’s hitting arm, which is known as “the spear”. Instead of sporting a boxing glove, as is the case in modern boxing, the hand is wrapped in a piece of cloth and tightly covered by rope. In the past, fighters would dip their rope-covered hitting arm in resin mixed with shards of broken glass, but this practice has been banned – for good reason. The other hand, or lead hand, is referred to as “the shield”. It is held palm open toward the opponent, in order to grab or hold on as needed. 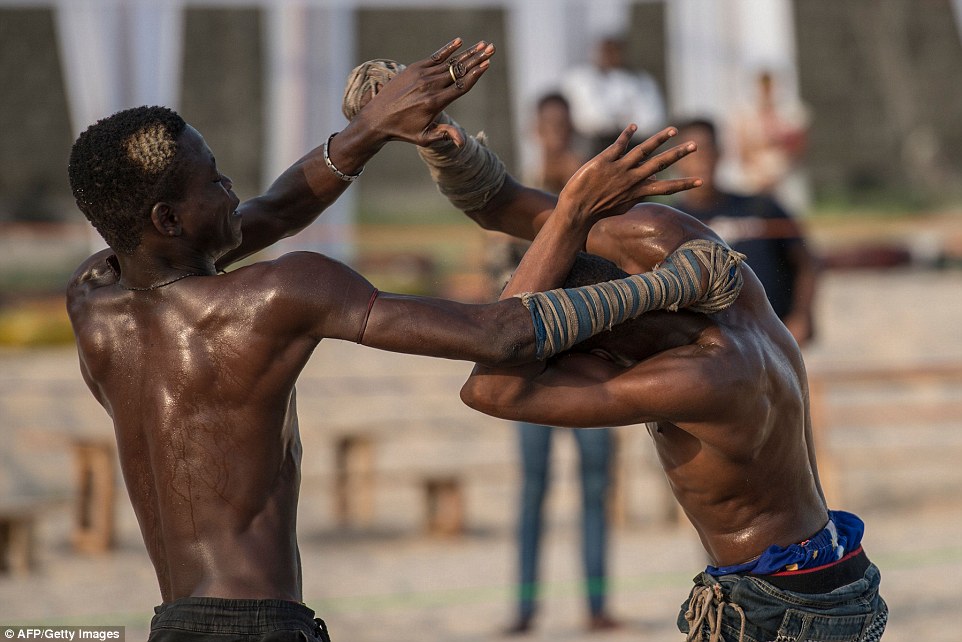 The fights have become an online sensation after Dambe Warriors was launched on YouTube in 2017 by content creators Anthony Okeleke and Chidi Anyina.

“We are looking at the UFC model. However, we want to make it indigenous and unique,” added Okeleke. “Our mission was to push Dambe into the mainstream.”

Competitors are often teenagers who train in gyms and yards and fight all year round. These fighters join professional communities that travel to fight for prize money. As reported on CNN, tickets are often sold for about 500 Naira (US$1.38) per person. “Usually the fight organisers make around 50,000 Naira (US$137) a day.” Winners can earn anywhere from US$20 up to US$500, which they can use to feed and take care of their families. But in common practice Dambe fighters are paid unfairly due to irregular payments being made by the controlling chiefs. They also do not receive the welfare or health packages necessary in such a brutal sport. Fans also present competitors with gifts: Muktar Muhammed, a 31-year-old fighter, told Al Jazeera that his cousin, who also competes, was gifted a young woman after he won a local tournament in Kebbi.

Spectators are a key part of the events. They surround the fighters to create a ring and energise the atmosphere by chanting to support or taunt the competitors or increasing the fight stakes by betting on their favourites.

Spectators are a key part of the events. They surround the fighters to create a ring and energise the atmosphere by chanting to support or taunt the competitors or increasing the fight stakes by betting on their favourites.